A participatory project on public monuments reexamining and transforming the shadows cast by colonial figures into the present.

Even though more and more European countries are beginning to come to terms with their colonial history, the prevailing culture of remembrance is darkened by deep shadows. Former colonizing and colonized regions are linked together by a complex and violent past that reverberates into the present. The art project “Monumental Shadows” explores the culture of remembrance critically and deals with monuments that continue to inscribe and reiterate the colonial logic in public space. 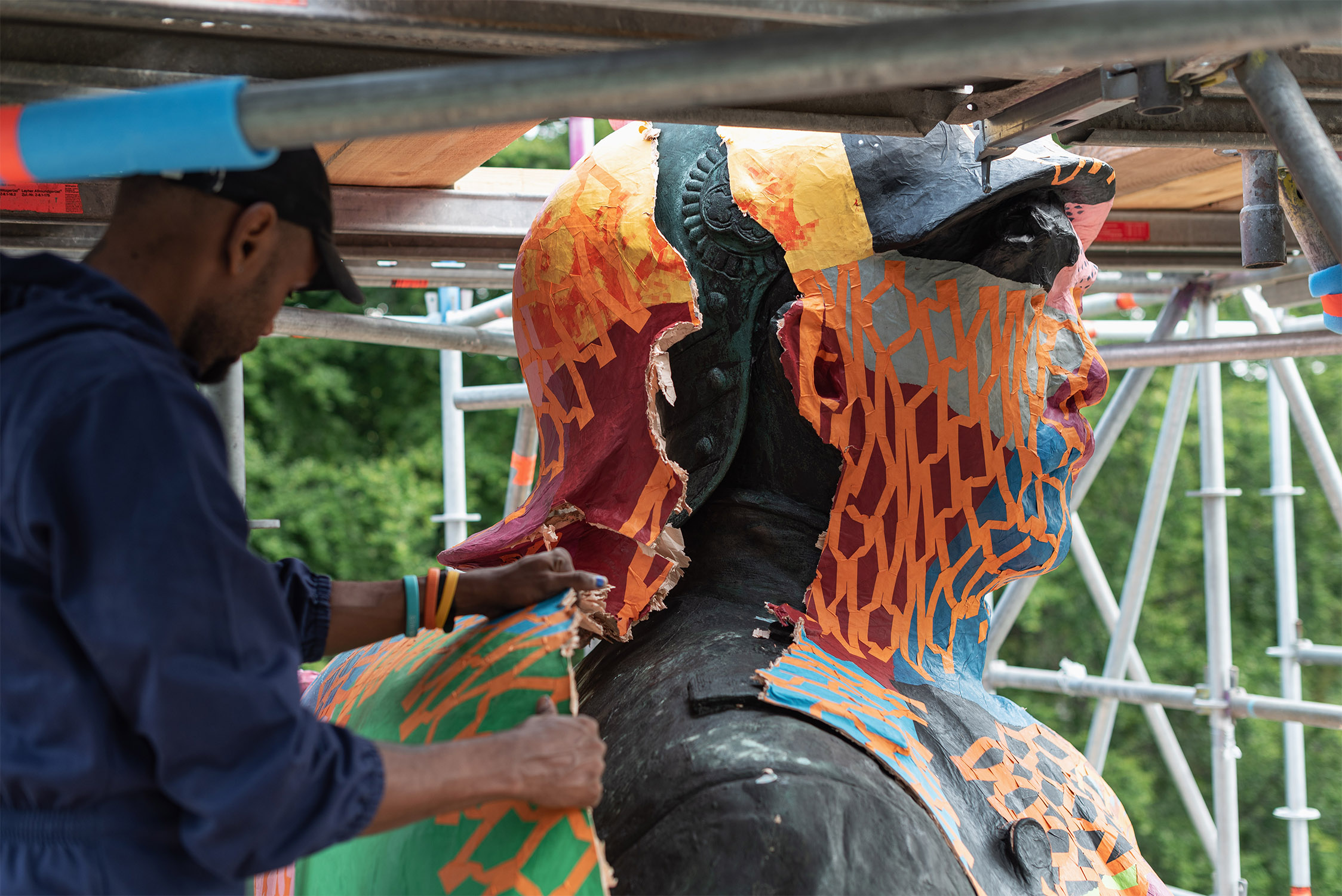 In a combination of artistic collaboration, thematic debate, and public discussion, the project makes visible connection between colonialism and contemporary racism. Within the framework of “Monumental Shadows”, a series of seven artistic paper molds of historical monuments in European cities is planned. Backdropped by the infamous “Congo Conference” (1884/85 in Berlin), these monuments are entangled with the European colonization and division of Africa. They play a significant role in shaping the national identity for countries that participated in the conference and to this day continue to benefit from it.

The selected monuments and the represented historical figures are still positively portrayed or even glorified in the historiography of their respective countries (and beyond). By publicly commemorating these figures, the colonial exploitation and imperialist atrocities for which they were responsible are concealed, downplayed, or glossed over. On the one hand, their active participation and facilitation of colonialism remains invisible to the general public, while on the other hand, their past actions cast long-lasting shadows over countless lives to this day, in the form of structural racism and everyday inequalities.

Using a technique based on papier-mâché, the monument is temporarily covered with thin, adhesive layers of paper, which, however, do not stick to the statue itself. After several days of teamwork, a three-dimensional paper shell is created. During the entire working process, active dialogue with visitors and passer-by is an essential part of the project. Once the paper shell has dried, it can be opened and removed from the statue.

The aim of the project is to demonumentalize these monuments by symbolically knocking them off their pedestals and charging them with new meanings. In the visual design of the paper molds, we address the respective monument and its colonial history. Through the lightness and malleability of the paper, their transience becomes visible. 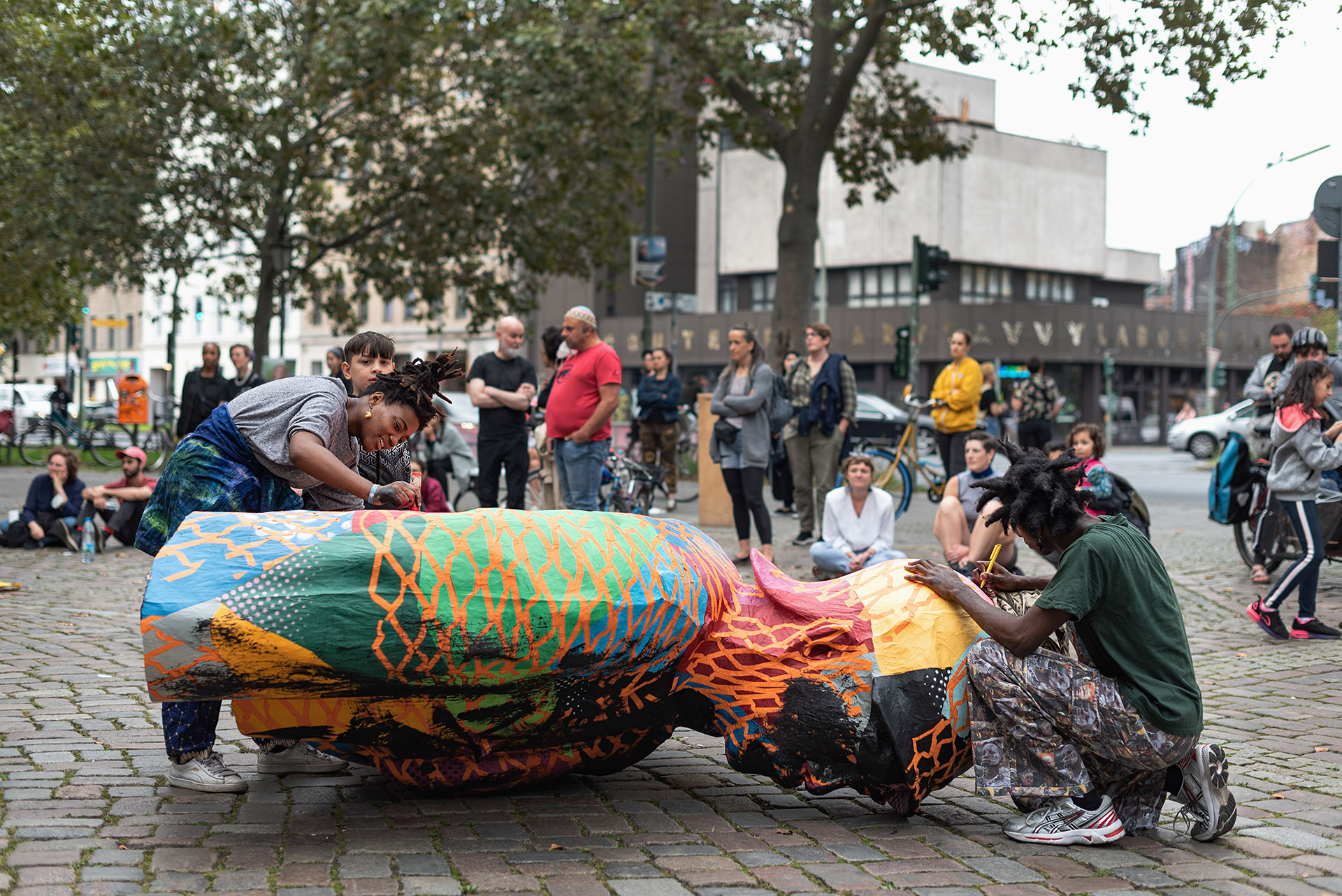 Subsequently, the resulting molds are transformed by artists in urban performances through which the paper fragments become tangible. This shows: History is not static, and we are all part of it.

Our concern is to raise and strengthen the public awareness of the on-going consequences of the colonial era. The fundamental change and multiplication of perspectives are the essential steps to disrupt the one-dimensionality of a white hegemony in Eurocentric historiography. It is long overdue that today’s collective memory work includes the experiences and voices of BIPOC, which have so often been silenced or ignored until now.

“Monumental Shadows Berlin” is an artistic exploration of Germany’s colonial heritage and current culture of remembrance. The project ran from August to the end of October 2021 in Berlin and was divided into four parts, so-called “Shadows”. In different formats, the participating artists and speakers questioned the effects of colonialism to the present day.

The starting point is the experience that German colonialism is often played down in public discourse. It thus lies in the shadows for many people and at the same time casts a long shadow over the lives of many.

The project was initiated by artist duo Various & Gould and developed in cooperation with Colonial Neighbours a project by SAVVY Contemporary.

Bismarck and the German colonies

Bismarck is known to many people today primarily as the first German Chancellor and because of his social laws, which were progressive for the time. Many people may also still be familiar with his military appearance with pimple cap. Less well known, and thus overshadowed, is his significance for the history of German and European colonialism. As the founder of the German colonial empire, the traces of his actions still have an impact today.

Bismarck was not a colonial enthusiast for a long time. At first, he did not want any German colonies, as for him the costs and benefits were out of proportion. Nevertheless, he changed his mind. He became host and co-initiator of the „Congo Conference“ in Berlin (November 15, 1884 – February 26, 1885), where the participating – mainly European states – legitimized and regulated the division and exploitation of the African continent among themselves in a common cause. And this under exclusion of any African representatives.

In 1884/85, the German Empire declared Togo, Cameroon, German Southwest Africa, German East Africa and German New Guinea as its own protectorates. Bismarck can be described as the midwife of the German Colonial Empire. The Berlin meeting had immediate consequences for the African populations. For example, the establishment of an administration in the colonized areas was made a condition for documenting colonial claims. As a result, the colonial apparatus, which in many areas was limited to the coastal regions, expanded into the interior of the country, placing many Africans directly under colonial authority and administration for the first time through taxes, forced labor and other measures.

The German colonial period, still dismissed by many as „harmless“ because of its supposed brevity, was marked by massive day-to-day violence and atrocious crimes, such as the genocide of the Herero & Nama (1904-08) in what is now Namibia and the bloody suppression of the Maji-Maji uprising against colonial oppression (1905-07) in what is now Tanzania, both of which occurred just a few years after Bismarck’s resignation.

The colonial boundaries sanctioned in Berlin became the basis for postcolonial state formations and largely remain valid today. The ruthlessness toward African interests and African contexts of rule created and entrenched injustices and conflicts that continue to have an impact into the present „independent“ Africa.

A present-day remembrance of Bismarck must reflect on these far-reaching effects of his governance and bring them out of the shadows into the light.

“Monumental Shadows Berlin” kicked off with an urban intervention by Various & Gould at the Bismarck statue in Berlin’s Tiergarten, Großer Stern, 10557 Berlin. Using a technique related to papier-mâché, the two artists and the Colonial Neighbours team have temporarily molded the monument and removed this paper shell from its pedestal. 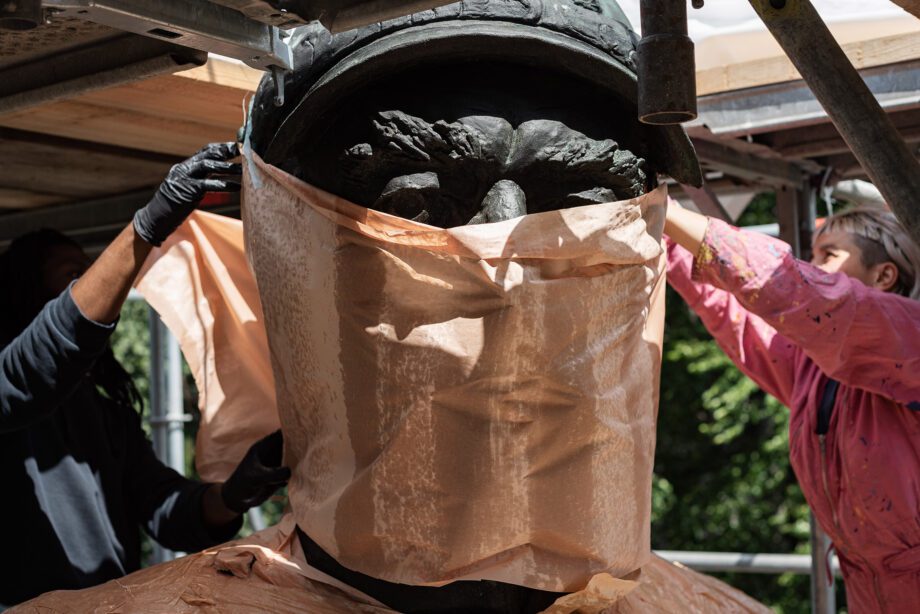 The artists duo Various & Gould temporarily concealed and molded the Bismarck Monument (1901 by Reinhold Begas) with multiple layers of paper. 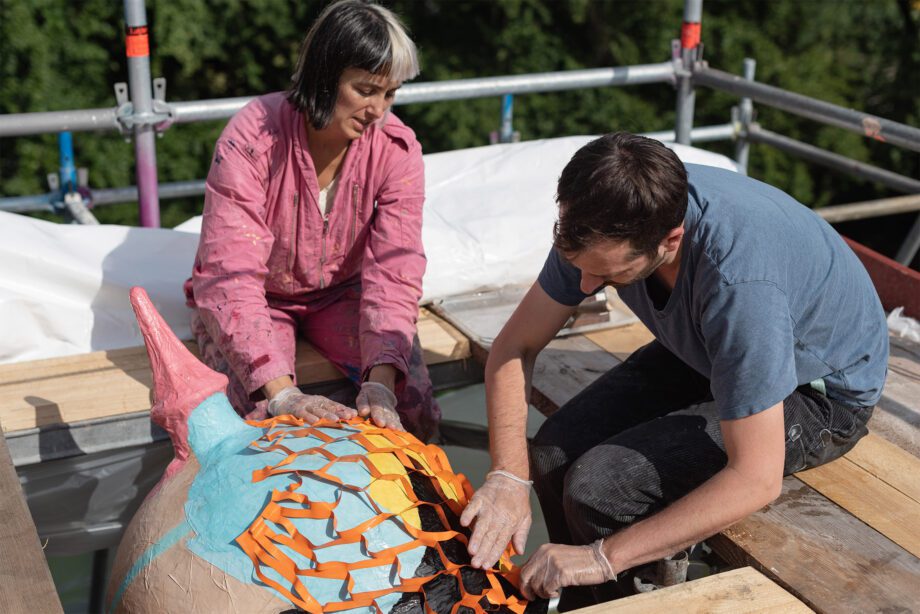 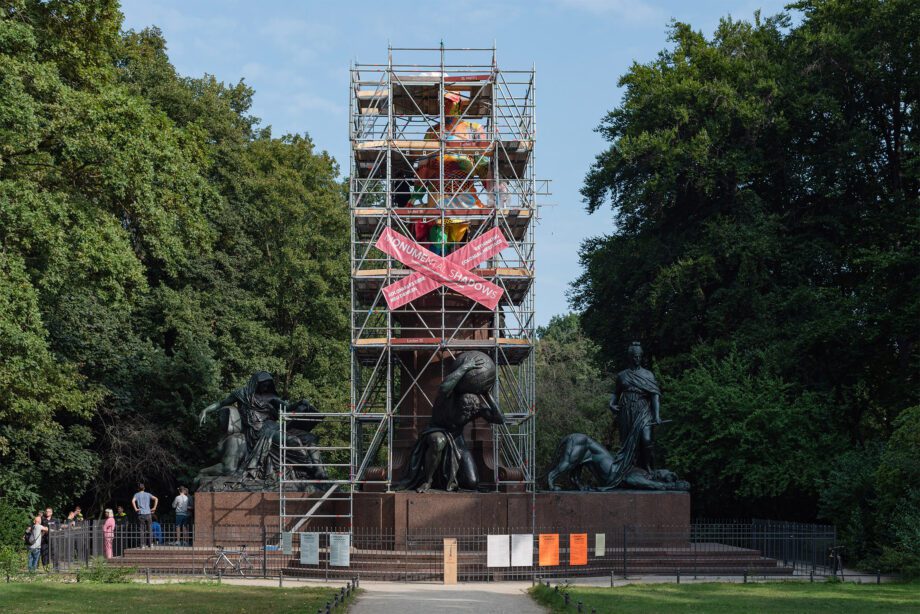 On the last day of work at the statue, the paper form has been opened … 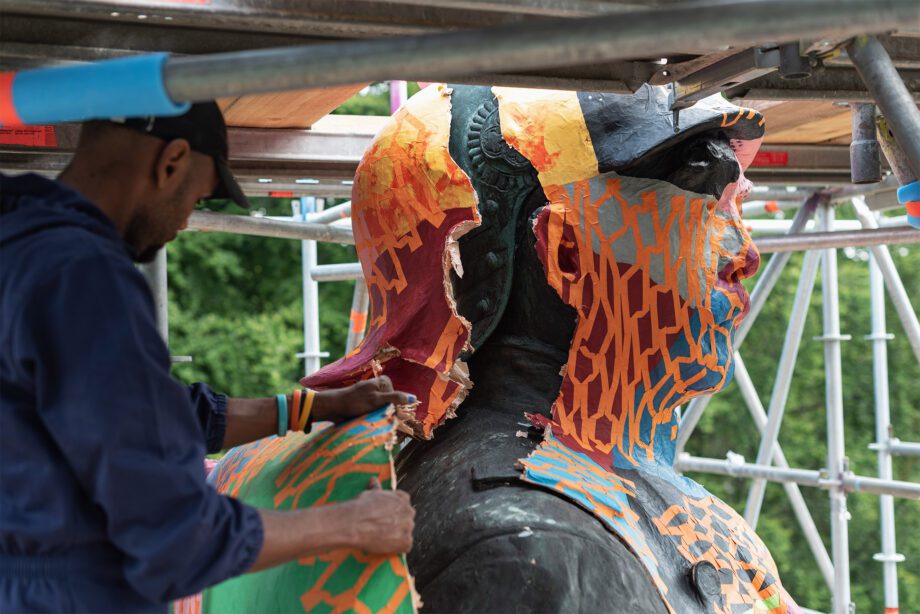 … and taken down from the pedestal under the eyes of dozens of visitors. 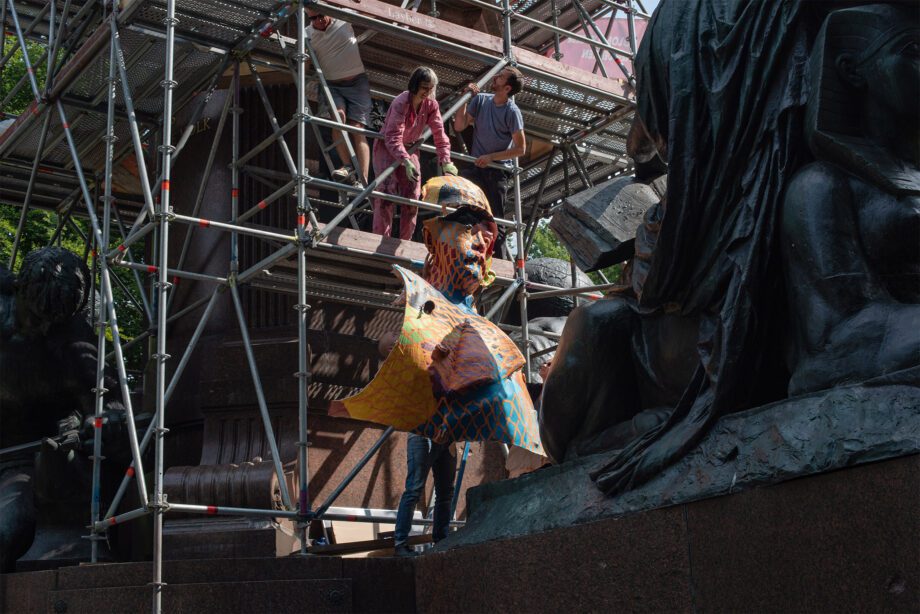 At the same time, Daniela Medina Poch & Juan Pablo García Sossa scratched a large lettering in the path to the monument: 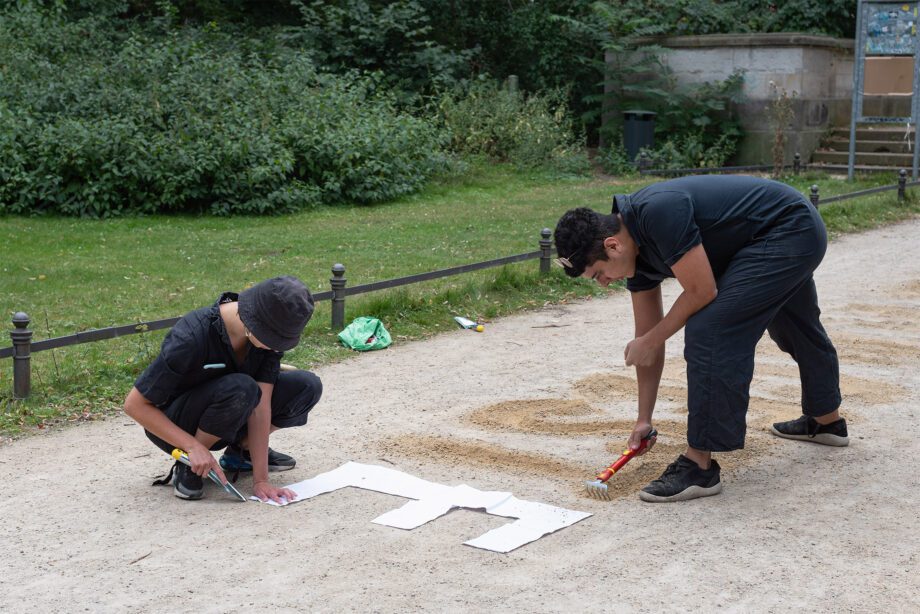 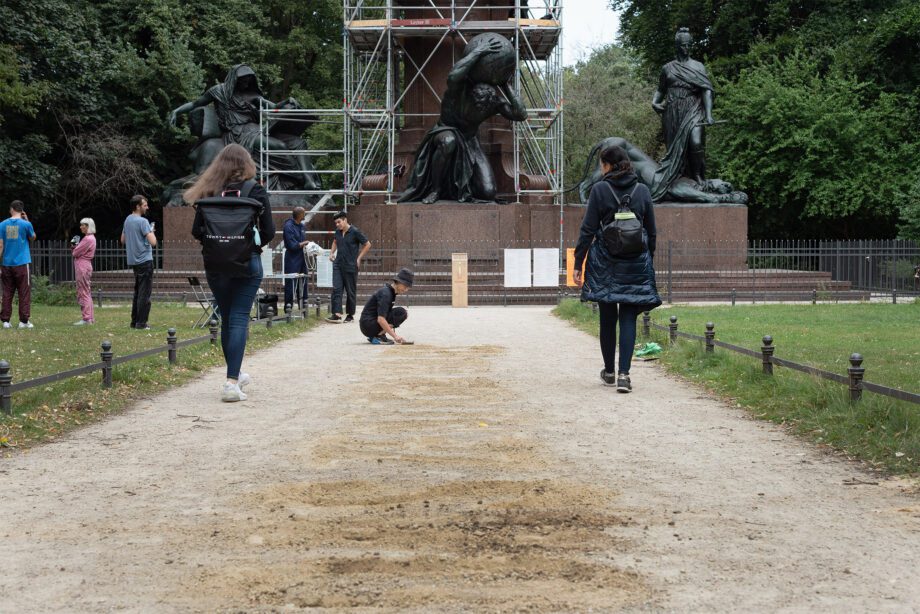 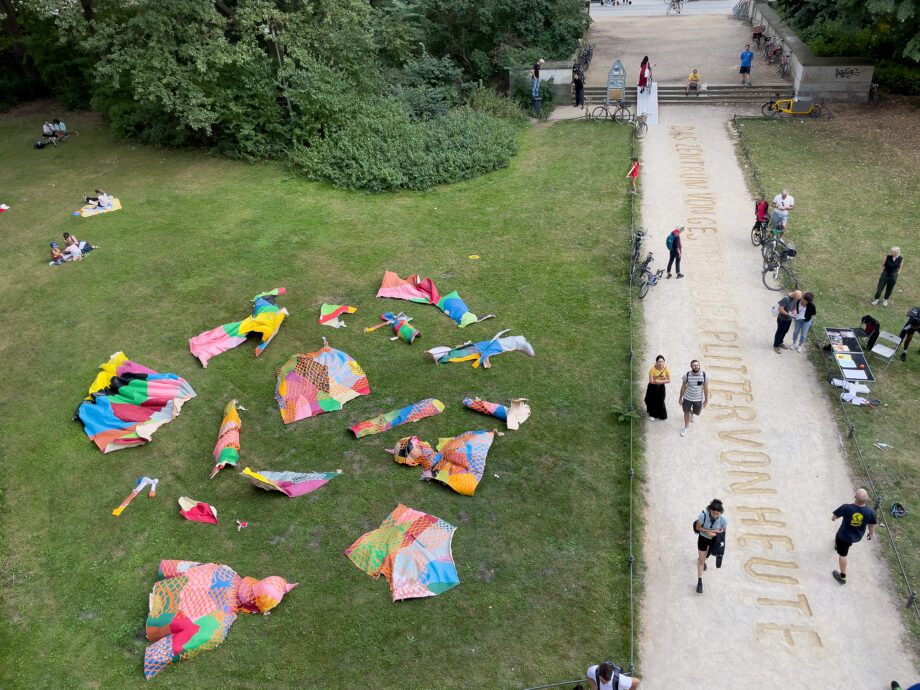 „Gospel of Wealth“, urban performance by Thomias Radin with Natisa Exocée Kasongo, Jumoke Adeyanju & Delawhere.
The fragments of the paper-Bismarck from Shadow#1 were part of this performance on the Open Monument Day, 12th of September 2021.
The location of the event is another public square that bears a history of violence in its name: Nettelbeckplatz, which commemorates the colonial propagandist and slave trader Joachim Nettelbeck. 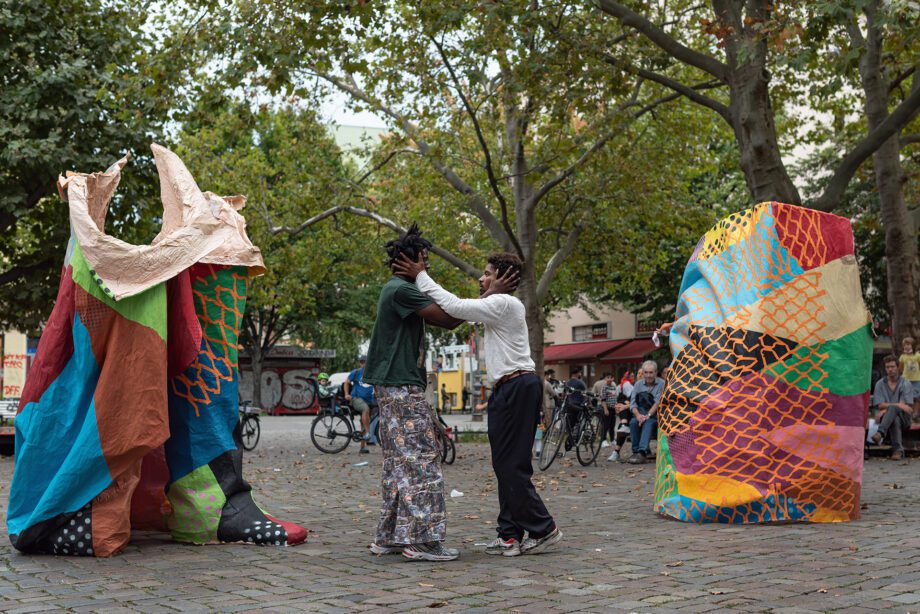 Collateral damage. The myth of the one over the existence of many.

Many of you, many of us, many of them, many of me are echoing inside the empty shell of the one. 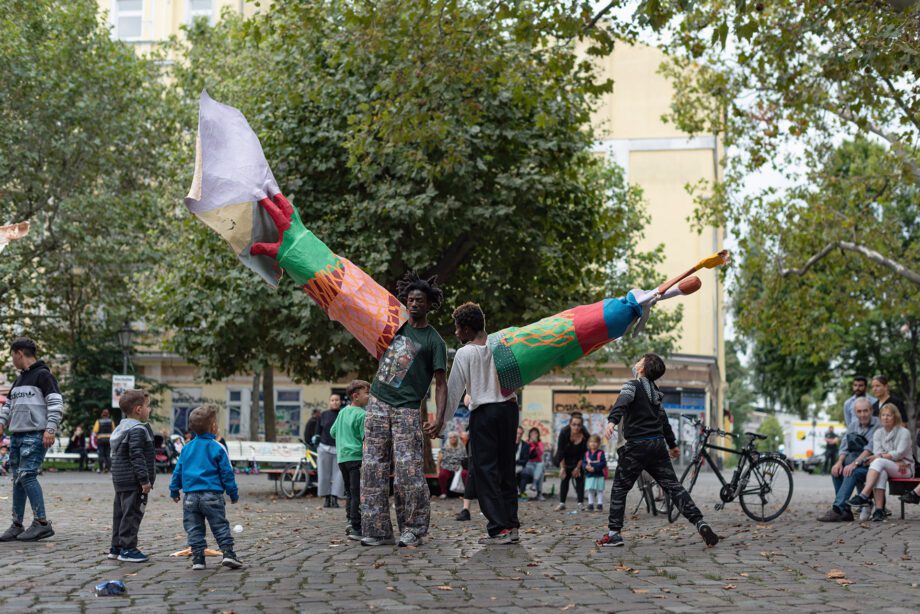 ‚GOSPEL OF WEALTH‘ questions the impact of the glorification of a western colonial figure and its heritage within the individual and collective consciousness, from an Afro-diasporic perspective. From Nigeria through Congo to the Caribbean. 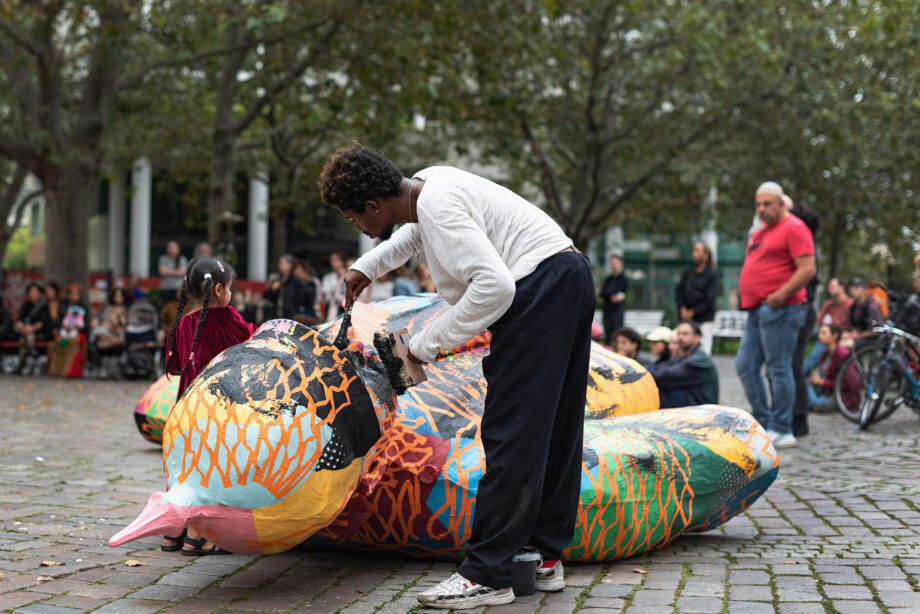 In the performance, we encounter several mythologies, embodied by sonic and danced intervention. We aim to open a new conversation acknowledging and valuing collectivity over the myth of a political figure and material wealth. 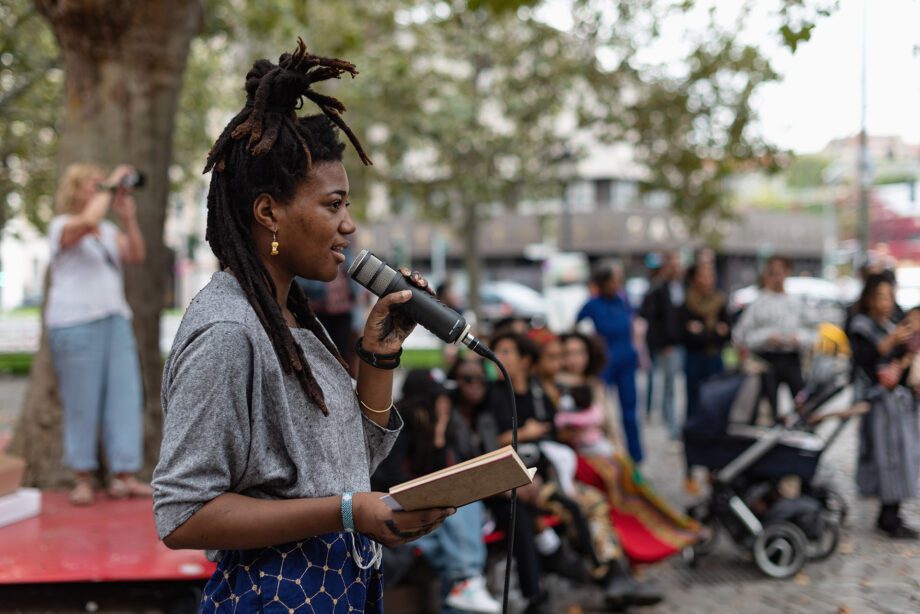 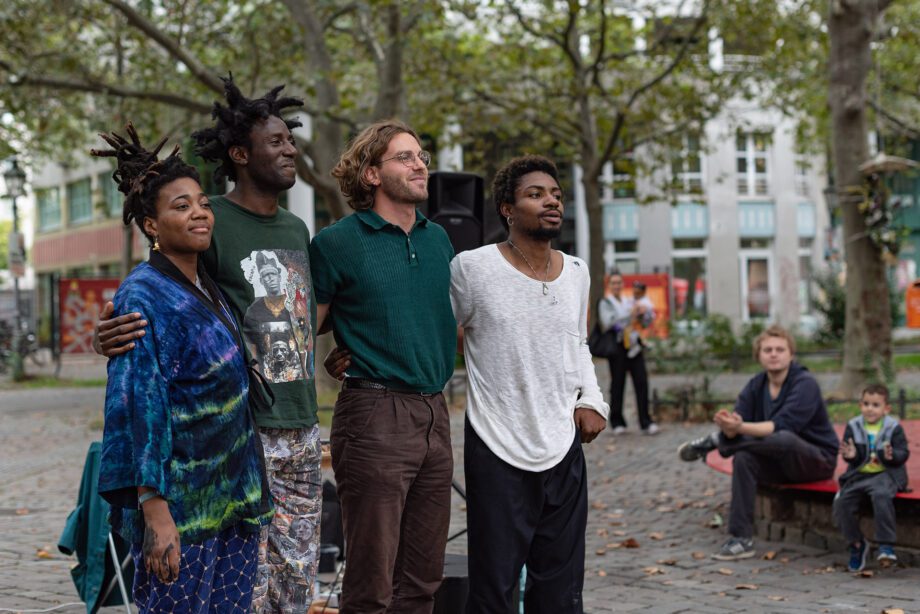 In artistic and creative workshops, we worked with pupils on remembering, history, colonialism and racism. 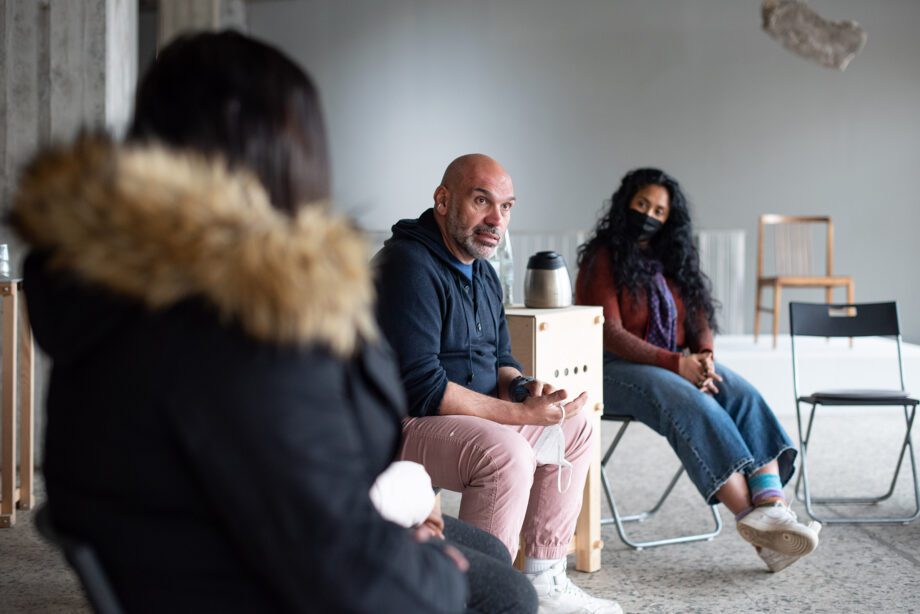 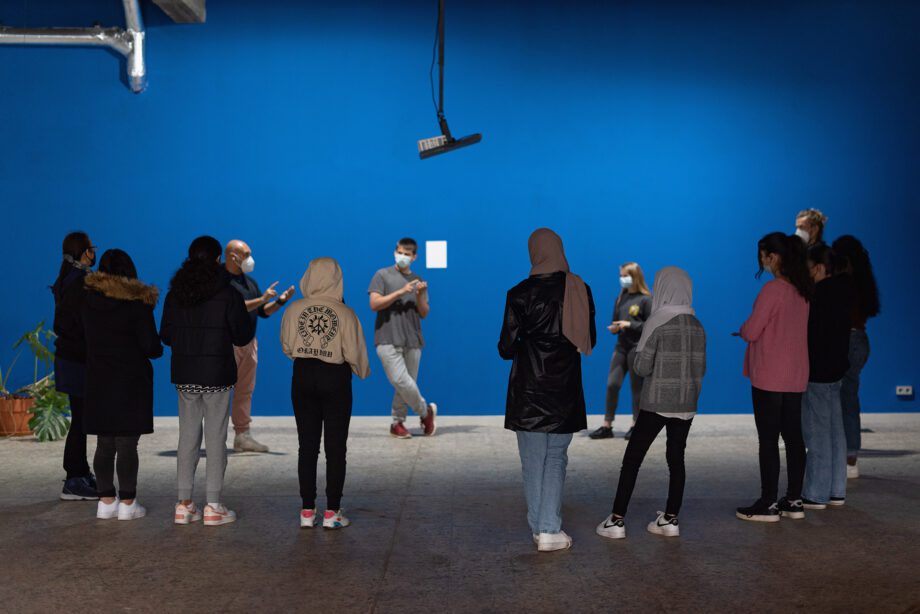 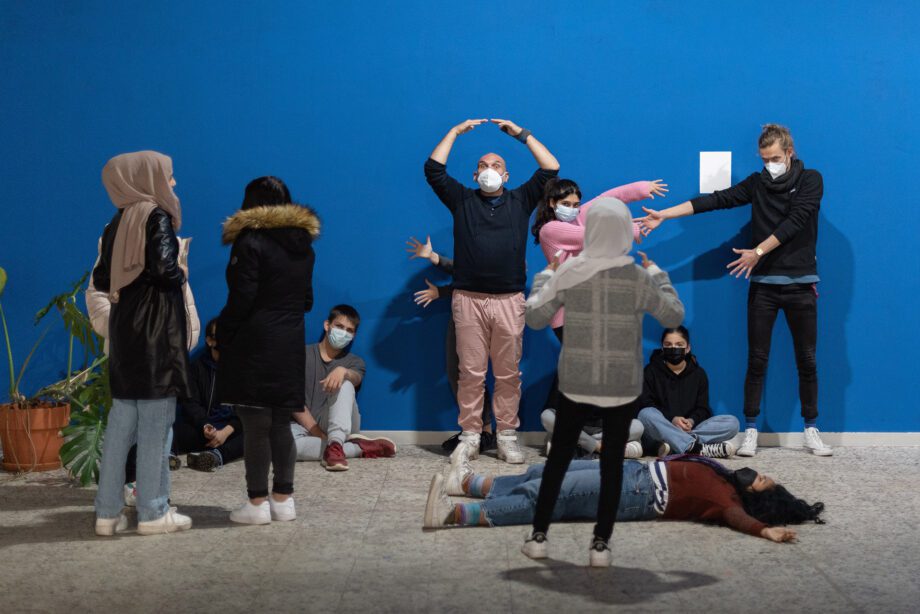 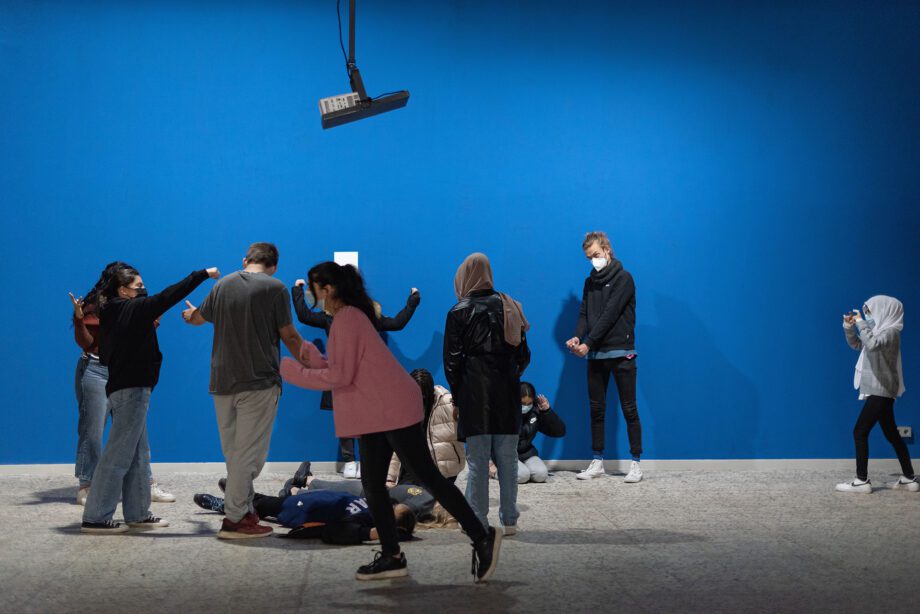 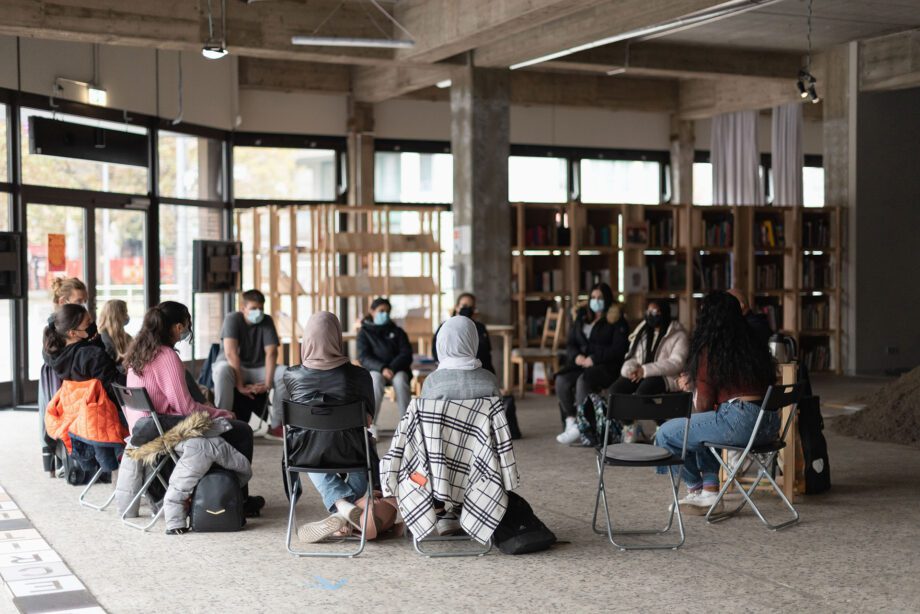 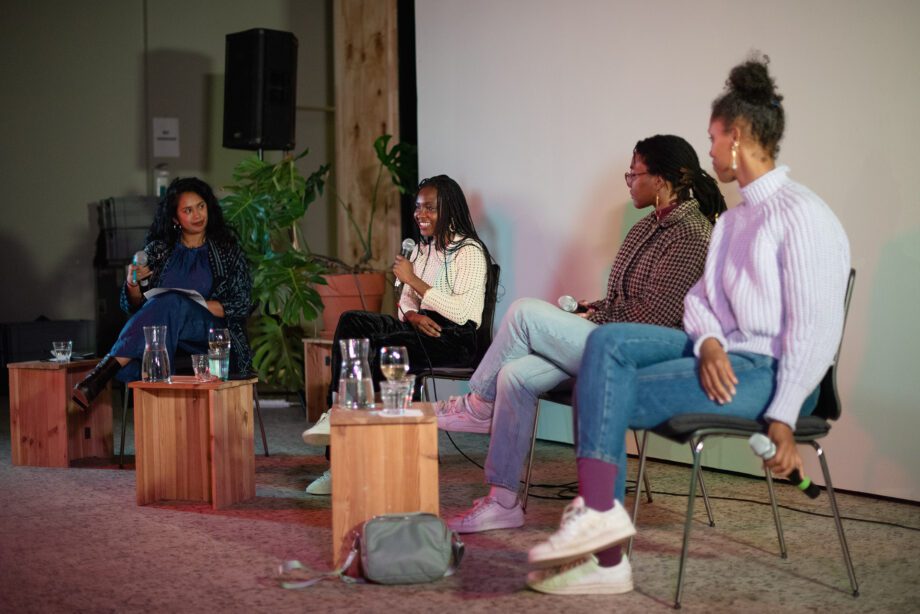 To close the Berlin chapter, we invited to an exchange with performances, lectures and conversations about interdisciplinary experiences and strategies in dealing with colonial heritage.
As a premiere there was a screening of the documentary film “Monumental Shadows – Rethinking Colonial Heritage” by Frederic Leitzke. [Film music by Levitation (Stefan Rusconi & Tobias Preisig) and Delawhere.] 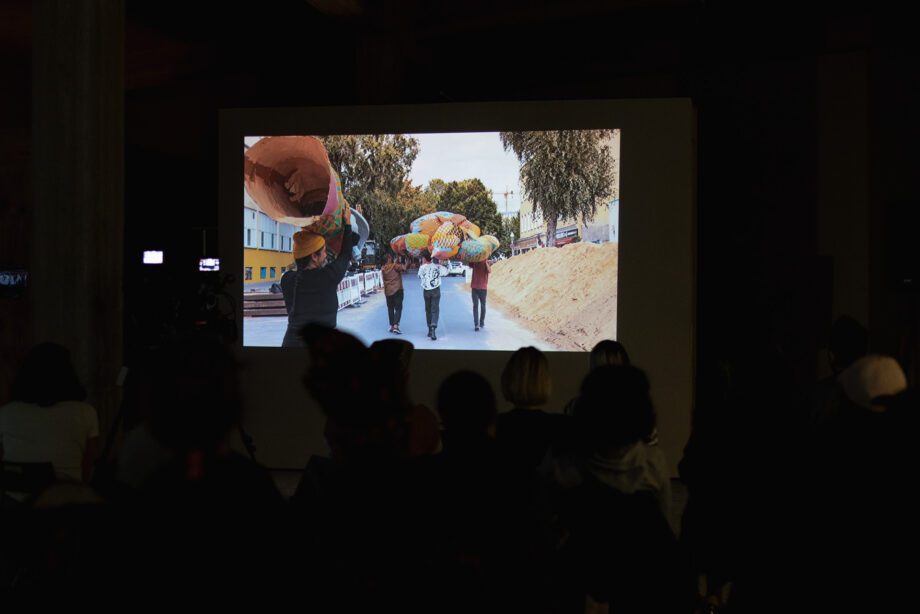 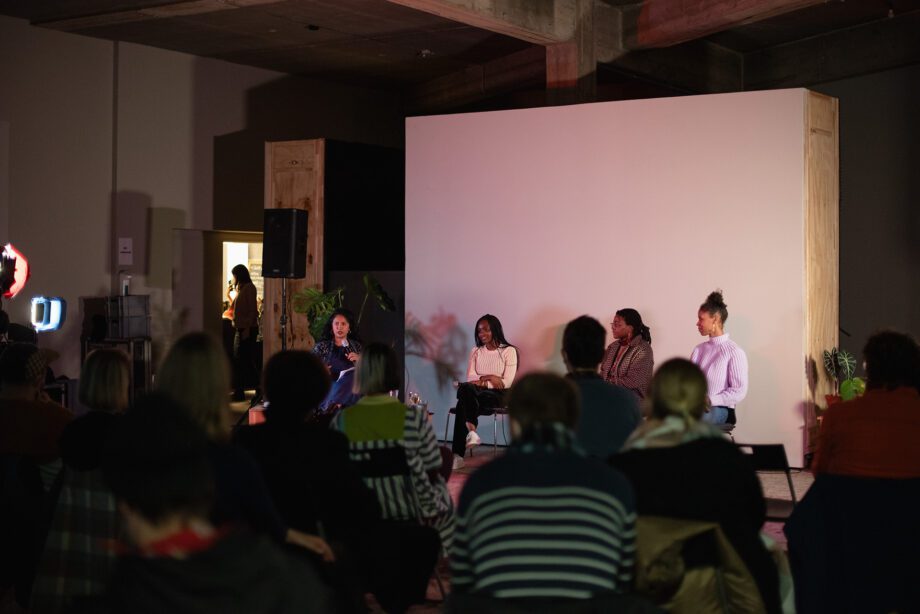 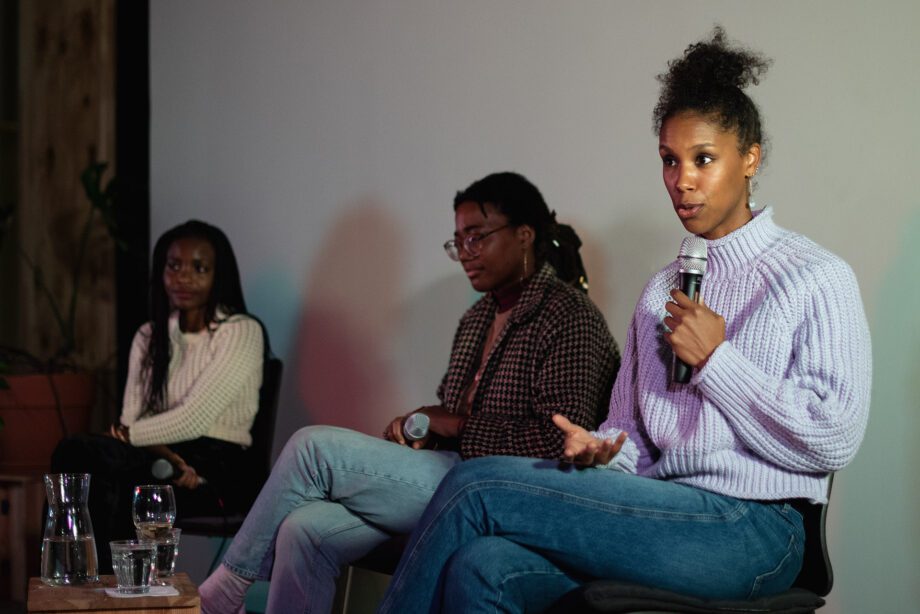 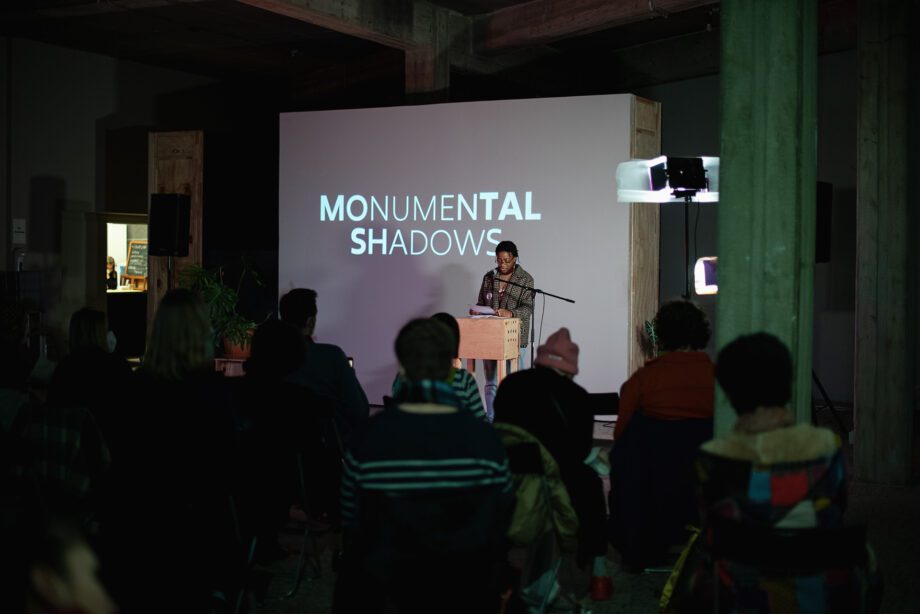 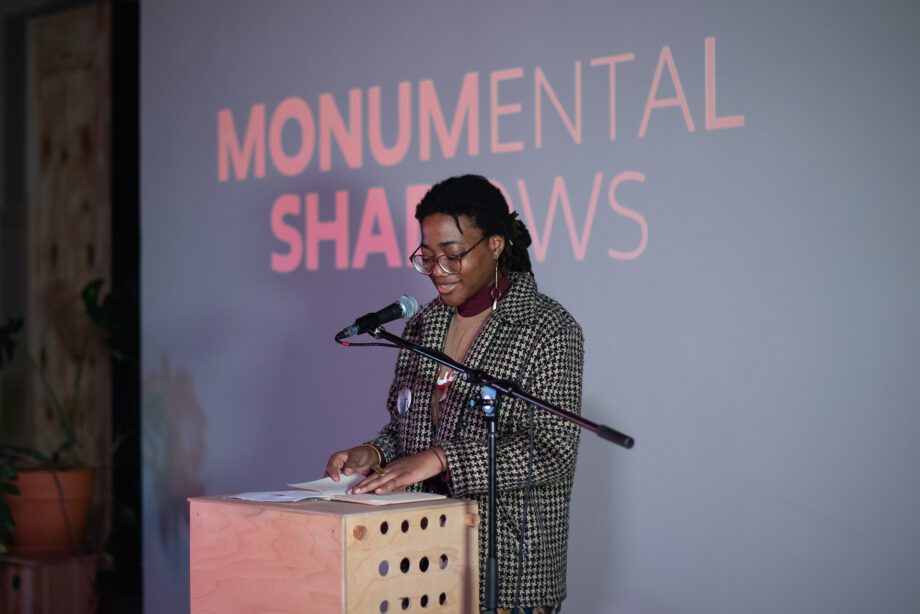 Finally there was a DJ set by Hanaby. 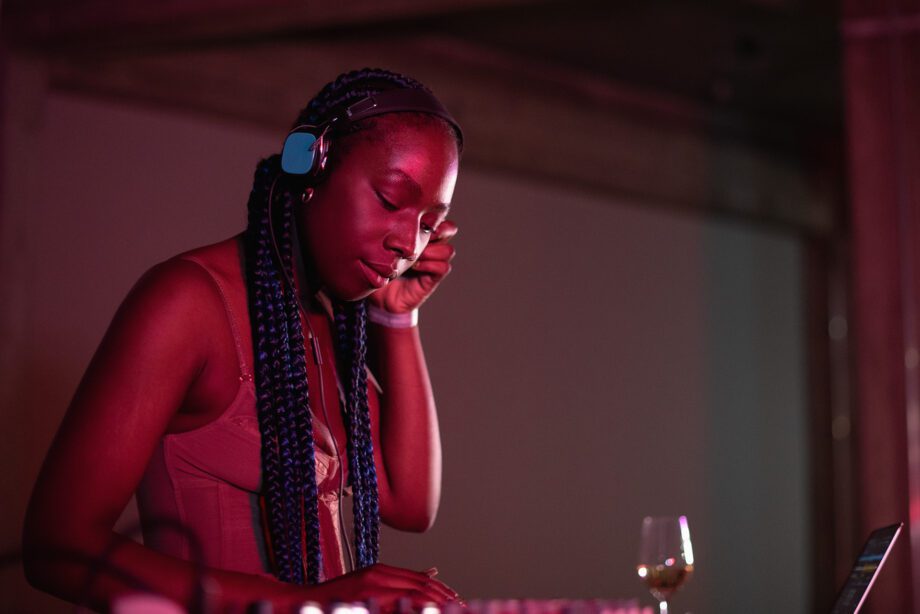 The Berlin based artist duo Various & Gould works in close collaboration since 2005. After studying at the Berlin-Weissensee School of Art (KHB), the artists graduated under the tutelage of Prof Alex Jordan (Grapus collective) in 2010. Various & Gould are known for constantly reinventing themselves. Whilst methods of screen-printing and collage are their speciality, their art can also emerge in a public performance or an installation as they like crossing borders and do not stick to a certain medium. Various & Gould often deal with socially prominent themes such as work, migration, gender, death, religion or the financial crisis in a playful, intuitive manner.

Colonial Neighbors is a long-term project by SAVVY Contemporary in Berlin. It is a participatory archive and research project which invites international artists, historians, cultural scholars, curators and other activists to engage with German colonial history and its aftermath in the present.